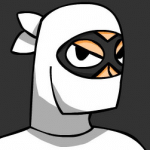 Hey, everyone.  I'm The Ninjkabat, resident Ninja and leader of the Ninja Cadet Faction (which is pretty much defunct now).  I go to a lot of Aquabats shows around the So Cal area, and sometimes I give out ninja related memorabilia at shows.  So if you see me, come up and get a hug or a high-five.

I'm also an admin for this wikia, so if you're looking for help or someone to fix something, you've come to the right place.

As an admin for this wikia, I have the power to fix things that regular users can't, and I also know a lot about how the wikia works.  If you have any questions or concerns about the wiki.  Please leave me a message on my talk page.  There are sections for you to leave your message under, so use the table of contents to navigate to where you need and then click "edit."

If you need to talk to me immediately, you can find me on skype as "ninjkabat."

I’m a ninja from Orange County.  I was born into a ninja family that’s part of a clan based around Fullerton.  After being trained and tested in a variety of martial arts as a child, the elders came up with my style that matched my natural talents for maximum effectiveness (they do that with everyone).  They came up with a lot of sword and bo work that combines with my speed and jumps a lot.  They also recommended white as my natural color (all ninja start out with black) because of my ability to use heights during the day in order to blend in with the sunlight.  Needless to say, I took their advice, and when I came of age at 12, I took my first ninja name and started studying with my new style (The Ninjkabat is my 3rd ninja name.  You won’t ever learn the first two. They’re entirely too embarrassing.)

As a junior in high school, my best friend introduced me to The Aquabats.  I know that’s not a very exciting story, but it’s how it happened.  She made me a mix CD for xmas that had “Captain Hampton and the Midget Pirates" on it, and I was hooked by the lyrics.  Reminded me of other fun lyrical groups I liked.  That was in 2003 and when I went to college in 2005 I finally took charge of my finances and did the most financially responsible thing I could think of: buy a cadet package (this is when I incorporated the mask into my everyday wear, and it had the added effect of being good for very bright environments.  It’s like the paint that football players use under their eyes).  For the next 5 years, gifted with the cadet #5603, I became very active in the cadet community on the forums.  I attended around 20 concerts of varying size and shape in that time and a few other events like Cadet Summit in 2006 and a private birthday party show down in Huntington Beach (that girl was rich, man!).  During this time I was at UCLA where I double majored in Ninjary and Japanese, earning my BA in 2009.  In 2010, I took a job in Japan as a municipal ninja for the city of Takaoka.  They had an exchange program where they brought in ninja from around the world to pair up with natural Japanese ninja to encourage the exchange of ideas and styles and all that political sounding stuff.  I was brought in specifically because of my course work with demonic linguistics, which came in handy due to the proximity to Mt. Futagami (very pretty countryside, too).  I did that for 2 years during which the Super Show! came out, which was exciting.  Now I’m back in Japan to attend Kyushu University for graduate school, where I will earn my MA in Bo techniques.  It's very exciting, but very time consuming.

I’m a pretty laid back guy for being a deadly trained ninja.  I much prefer non-lethal work, like surveillance or extraction.  And for being a ninja, I really don’t like to see fighting.  Whenever I see friends fighting, I feel the need to jump in and help both sides come to a compromise, like Hey Arnold, but without as much fashion sense.  I think that I’m funny….  I’m also currently dating another cadet, Souper Stella, which is great.  Normally I have to bring girlfriends into my love of The Aquabats and everything they stand for, but not this time.  I have only 1 sister who lives in Boston and both parents, none of whom really are into the Aquabats, but at least they try to be understanding of how much I’ve incorporated them into my self.  It usually doesn’t affect my ninja work, but I think they think I do too much pro-bono goody two-shoes work.  Oh well.

Well, I'm a ninja. That's not necessarily a power, but I don't have any real super "powers" beyond the degree of physical fitness that I've attained through my training. I mean, I can run pretty darn fast (fastest 100m was 10.4) and I can jump high and far and I'm pretty darn strong, but it's not super-human by any degree.

I guess the closest thing to a "power" that I've attained is my ninja "invisibility." It's not real invisibility, but by using tricks like misdirection and people's disinclination to look up during the day I can maneuver around people and sneak up on them easily. But that's, like, just using human nature to my advantage. If I move between you and the sun and I'm wearing all white, there's very little chance that you'll notice me because you're not going to look at the bright sun.

I've done some Aquabats related animations.  You should check them out.

1 of 4
Add photo
Retrieved from "https://theaquabats.fandom.com/wiki/User:Ninjkabat?oldid=12354"
Community content is available under CC-BY-SA unless otherwise noted.