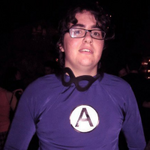 AWESOME LAD is a an Aquabats fan, collector and "historian".
He is known for his now defunct webshow Aquabats Obsessed.
He is and Official AquaCadet.

Awesome Lad was first introduced to the music of The Aquabats in 2005. That same year he attended his first Aquabats concert and that's when he became a huge fan.
He has since then started collected Auabats memorabilia and rarities and has built up a nice collection, which he is slowly archiving on tumblr.

Miles grew up in the small town of Los Angeles. Early in his life he found a liking for making and creating things. In high school he started making Aquabats costumes, with his first costume being a FEOD era costume with homemade rashguard.
He is currently working on his goal of making props and costumes full time.

Appearance on The Aquabats Super ShowEdit

Retrieved from "https://theaquabats.fandom.com/wiki/User:AWESOME_LAD?oldid=11371"
Community content is available under CC-BY-SA unless otherwise noted.