The M.C Bat Commander (or MCBC or just MC) is the lead singer and leader of The Aquabats and the keeper of the power of leadership. He may not show it all the time, but he cares about his his team, and about helping the innocent.

The Bat Commander is of average height is , and is a bit more overweight then the other Aquabats (mostly due to his love of fast food). He has brown hair, hidden under his Anti-negativity helmet

His most distinguishing feature, however, is his one black obsidian tooth and a marker drawn, curly-cue mustache above his lip.

When he was a teenager, he had blonde hair, and a face girls fell for.

The self-proclaimed leader of The Aquabats, the Bat Commander is also their lead singer, entertaining crowds by performing backflips off Ricky's drums, and is usually the one to rally the others into battle, with his signature cry of "Aquabats, lets go!".

Although he doesn't have any superpowers of his own, the Commander is a brave and determined - if mostly naive and impulsive - leader.

According to the Commander, he and his friends all came from a tiny island, somewhere deep in the South Pacific, called Aquabania. It was a beautiful paradise, hidden away from the rest of the world, where their people surfed all day, and ate food all night, and when there wasn't any food, they ate sand.

But then, one dark day, out of the sky, a force from outer space invaded their little island home, the nefarious Space Monster 'M'. Fortunately, he, along with seven other Aquabanians managed to escape, using a hollowed out log for a boat, and vowed one day to return again, with help.

The journey was harsh, and not all of them made it, but eventually, the five survivors washed ashore on a beach, where a kindly professor found them and took them in. He nursed them back to health, made them shiny blue uniforms, and created special weapons and chemicals to enhance their natural abilities and strengths. Ricky was given super speed, Crash super strength and giant power, EagleBones was gifted with a special laser shooting guitar, and Jimmy was turned into a cyborg robot (the Commander got upset when asked what power he got, telling the kids to "mind their own business").

The professor then gave them a mission, to become a rock and roll band! With Ricky on drums, EagleBones on guitar, Crash on bass guitar, Jimmy on keyboard, and the Commander on...vocals, yeah....

His final gift was his greatest yet, a totally tricked-out ride, the Battle Tram! The group rode off into the sunset, calling themselves The Aquabats.

The M.C seemingly has no real super powers.  This may make him the greatest hero of them all because he fearlessly fights crime without the aid of such powers.

The Commander is the de-facto leader of The Aquabats, and is a natural at it, coordinating his fellow Aquabats to attack enemies. He also sometimes gets help from EagleBones to organize the team.

EagleBones' new inclination to take the reins of the team still causes a few disturbances between him and the Commander, but it's more like a playful rivalry than outright insubordination.

The Commander prefers not to plan when it comes to making certain decisions during missions, stating that "Planning takes time that men of action don't have, being quick on your feet and making split-second decisions, that's what makes a true leader".

While most of the time, this only makes the problem worse, there are occasions when his impulsiveness actually works.

The Aquabats are the Commander's best friends, super team and band.

MC and the rest of the gang, Referring to his phrase "Planning Takes time the men of action don't have" He panics with a plan then yells at Giant Crash "Throw me at him!" Out his first idea. When thrown, He Landed in Space Monster M's Eye. Since he doesn't have eyes, His eye socket is completely empty

The Commander resents Jewel for her popularity and making him look like a fool in front of the campers, and when he thinks she's a monster who's been kidnapping campers, everyone else thinks he's making things up to try to get rid of her. In the end, Jewel does turn out to be a monster who was kidnapping campers to dig for jewels to put on her sweaters.

The MC Bat Commander (MCBC), also known as Christian Jacobs, is the lead singer and the fearless leader of The Aquabats. The albums also name him as The Caped Commander or The Bat Commander. The MCBC is the headman who, with his varying voice and humorous lyrics, can bring many different feelings to songs. He is very charismatic on stage by jumping around, hand jiving, dancing, and engaging the crowd at live shows.

The Rise To Power[] 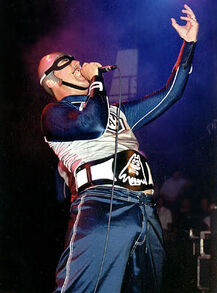 Deep in the caverns of the volcanic trenches of Aquabania live a people who are very hot all the time. But rent was cheap, so one day, The M.C. Bat Commander was born. Even at an early age, he was commanding his parents to cut his hair and get him a glass of water. Life was good for the little commander, until one day, it just wasn't that great anymore. The young lad said to himself "You know, life isn't so great anymore." So he left the volcanic trench in search of his destiny.

He got a job at a local tourism bureau giving tours to tourists, yet his heart yearned to do something else. So, he moved into a warehouse where they shipped clothes to children all over the world for free. A noble cause, yes. But the profit margin was less than minimal. One day while he was contemplating his future (or lack thereof), he looked at the ground and found a flyer for a party at the Melony Hill where 'Space Monster M' was performing. "Cool" he said. "I like Rock and Roll music, it's quite dope."

Little did he know that this so-called band 'Space Monster M' wasn't really a band at all, but a space monster from outer space! Hell-bent on enslaving the people of the world, this vile enemy would stop at nothing. Space Monster M's intention was to conquer the small island of Aquabania first because of its semi-unknown location and mysterious reputation. He knew that the natives were weak because they wasted their lives on music, TV, Internet, and other worthless forms of entertainment.

The young Commander was shocked to find that his homeland was in danger, so in mock terror, he started to scream at the top of his lungs, kindling the annoyance of many of the surrounding people and causing his boss to let him go.

Now the Commander was really free to gather troops together to battle this menace. So, in a hollowed log, he led a handful of valiant warriors across the ocean to find help.

And so became The Bat Commander, fearless leader of the Aquabats whose goal is to one day battle and defeat Space Monster M and free their home from slavery and turmoil. Recently, The Bat Commander added "M.C." to his name because he secretly wants to be a rapper.

"After watching The Source Awards, I knew exactly what I wanted to be - an M.C., because Hip Hop is fresh and dope, and I really connected with the lifestyle. It's da bizomb!" --The M.C. Bat Commander 2000 (*bling*bling*)

Place Of Birth: The Bat Commander hails from the ghettos of the Volcanic Trenches of Aquabania

Group Affiliation: The Aquabats, The MC Bat Commander Project, The Moon Men, (The M.C. Bat Commander is currently working on a side band, Bling Bling-182, which he describes as a cross between Green Day and The Wu-Tang Clan...)

Known Super Human Powers: The Bat Commander possesses a Hypnotic Finger Ray as well as Super human durability and stamina. His stunning backflips have saved him many times, allowing him to paralyze his enemies by its sheer awesomeness and amaze countless crowds. He can withstand temperatures from 150 degrees F to 1500 degrees F before completely melting. He also can breathe fire, but he doesn't inhale. His super human stamina enables him to exert himself at peak levels for up to one half hour before fatigue poisons build up in his blood, causing him to tire. Then he rests.

Weapons: The Bat Commander is prone to use many weapons that don't work. This includes a bean gun, Poison lawn dart cannon and freeze rays.

Musical Likes: The Bat Commander keeps pace with the ever-changing current of pop and rock trends so that kids think he's dope.

The Bat Commander has a slight problem spending too much money on Jumbo Machinder Robots and Die Cast Japanese toys from the 70's.

The Return of the Aquabats:

The Fury of The Aquabats:

1/20
Community content is available under CC-BY-SA unless otherwise noted.
Advertisement