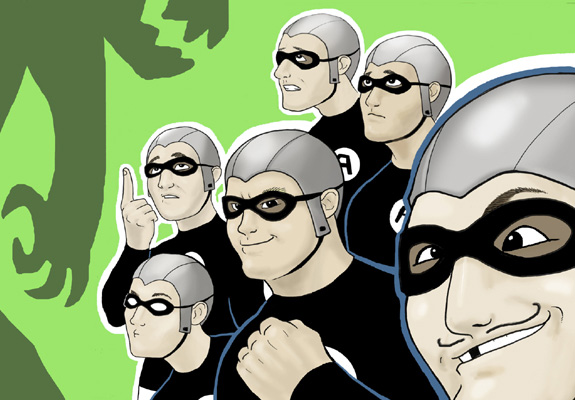 Crash McLarson: It’s been a lot of fun. We haven’t toured in awhile, so it felt good to get back on the road and rock across America!

MM: Alright! So how did the whole superhero thing get started with The Aquabats? Why goggles and neoprene?

CM: It’s kind of a long, stupid thing, so I’ll try to give you the more condensed, interesting version.

CM: When we started the band we were listening to a lot of surf music. So the Commander and I were thinking... you know how those old surf bands all dressed alike?

CM: And so (laughs), our friend Boyd happened to play the trumpet, and I was having this Madness flashback, so we started to play this band. We wanted Boyd in because he’s our homie... or Catboy. You know Catboy?

CM: Yeah, the Anti-Negativity Helmets. So we all played the show. Even though The Aquabats is a superhero name and the outfits are similar, it really wasn’t a superhero thing, at first. It was sort of like... well, Devo, surf bands, and ska, because our friend plays the trumpet and I like Madness. So that’s kind of how it all originated, and it just sort of evolved out of that.

MM: So then you brought in the villains, the allies, and the Saturday morning cartoon kind of feel?

CM: Yeah. That all evolved over time. It started out really simple and evolved into what it is these days.

All content on | tlchicken.com is ©2006 by tastes like chicken, LLC. No part of this website may be reprinted or re-transmitted in whole or in part without the written consent of the | publisher.

For the remainder of the article, | click here, or the link above.

Retrieved from "https://theaquabats.fandom.com/wiki/TastesLikeChicken_06/06?oldid=3454"
Community content is available under CC-BY-SA unless otherwise noted.