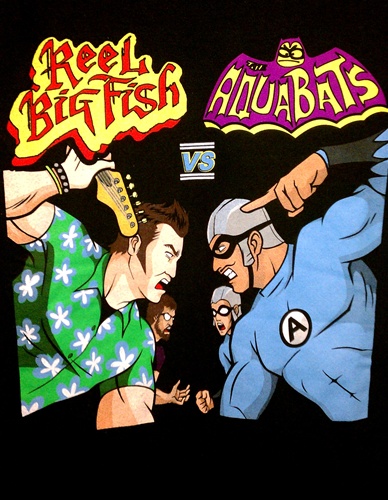 The Reel Big Fish vs The Aquabats! Tour was a tour that ran from November 9, 2010, until January 22, 2011. Promotional posters showed Aaron Barrett and Scott Klopfenstein standing off against The MC Bat Commander and Eagle "Bones" Falconhawk. It also listed Suburban Legends and Koo Koo Kanga Roo as "unlockable characters," because they also played on the tour. Reel Big Fish and The Aquabats alternated who closes the show over the period of the tour. Koo Koo Kanga Roo dressed up as evil scientists who fought The Aquabats during their set with their "new creation."

During the tour, The Aquabats' new album, Hi-Five Soup was released. On the release date and from then on, The Aquabats changed their rashguards from blue to purple to commemorate the release.

Retrieved from "https://theaquabats.fandom.com/wiki/Reel_Big_Fish_vs_The_Aquabats!_Tour?oldid=7283"
Community content is available under CC-BY-SA unless otherwise noted.