Obakemon began with a song Monsters Wedding!. In the song, there is a foreboding ghost's voice saying, "you must go". That ghost's name was Obakemon (which translates to "ghost-man" in Japanese).

Parker did the graphic design for the "Floating Eye of Death" album and knew that Obakemon would be a real fun character to illustrate for the inside lyric booklet. Of course, he is what he is in the song, a ghost man. He designed him to emulate the style of Christian's signature red cyclopses that he used to doodle. In promotion of the album, Obakemon later found himself on Aquabats t-shirts, stickers and jackets. They were mostly glow-in-the dark, cuz you know, he's a ghost!

He was also the inspiriation for Gooble on Yo Gabba Gabba. 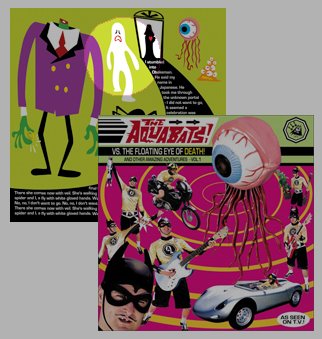 Retrieved from "https://theaquabats.fandom.com/wiki/Obakemon?oldid=11172"
Community content is available under CC-BY-SA unless otherwise noted.