The Aquabats played their February 11, 2011 concert at the Henry Fonda Theater in Los Angeles, California. It was the band's first Californian performance since their December 19, 2009 show at the San Diego House of Blues, perhaps the longest stretch of time between So Cal appearances, excluding The Aquabats' appearance with Yo Gabba Gabba! Live! This show was more or less the unofficial release party for Hi-Five Soup, and was the first California show to feature the Aquabats' new purple rashguards.

Chainsaw the Prince of Karate accompanied the band for this show.

The Legend Is True!

The concert featured only one villain fight, consisting of the two "pothead" aliens from the Ghost Battle video under the command of an unnamed man in a Hazmat suit. As the aliens silently spun around, the equally silent gas man released "mind control gas" from the side of the stage which prompted the Commander lie down and openly question whether or not he should just quit the band. A collective crowd chant of "AQUA-BATS! AQUA-BATS!" quickly revived him and a fight scene ensued, which featured stunts including MCBC spraying all three down with a fire extinguisher and smashing a dummy cinder block over one of their heads. There was a moment in the battle where everybody slowed down and started fighting in slow-motion.

The new show intro video and The Legend is True!: 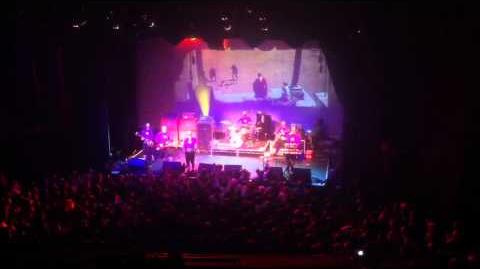 Retrieved from "https://theaquabats.fandom.com/wiki/Henry_Fonda_Theater_2/11/2011?oldid=12722"
Community content is available under CC-BY-SA unless otherwise noted.