Interview With The Aquabats

The Aquabats are, by far, the most whacky, goofy band around, this side of the universe. Currently featuring 5 guys in blue-y spandex, their keen eye on fashion is still way beyond any comparison, their main objective still is to rid the world of evil in whatever incarnation it may roam, and have people flash a smile or two in the (ridding) process. Their latest feat of arms is somewhat of a departure from the bands early work but carries the aquabats soundscape to unseen heights. Mr. Bat Commander was friendly enough to answer some questions fired his way, but we're hoping to bring you THE REAL DEAL when they come to Europe coming November.

Thanks to the people at punktastic who submitted questions. Sorry but I lost the file with yer names to give credit for each specific question! 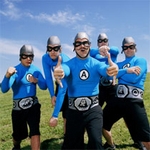 It took you guys a lot of time before you came around with “Yo, check out this ride” and the undeniable “Charge”. Why the long wait before those two and the obvious question being what have you guys been up to in the meanwhile?

Well, we had to take time off to fight for our right to party.

Where does your awesome-ness originate from? Did you guys just wake up one day with all your amazing and let’s admit it: quite unique, powers?

No, It was more gradual, like we were chia pets and our awesome-ness blossomed into leafy freshness, after time and careful waterings.

Which fellow Aquabat-ian’s powers are you most envious of, because I’m guessing each has his own characteristic strong points?

Actually, there are no inter-band conflicts, jealousies or turmoil, although I do often wish I could yodel.

How’s the quest for Aquabania going, or have you long since abandoned that road, seen the fact that Pizza day is on its way?

We know that one day, our day will come.....with pepperoni.

On the Myths, Legends and other amazing adventures CD you featured a bunch of B-sides and rarities. Now The Aquabats will probably always be a band that have way to many songs for their own good, but what of all the other songs that didn’t make it on a silver shiny spindisc so far? Any chance of doing something similar in the near future?

No, no chance. Unless we have too many songs.

Now that we are heading down that road, which of the many cover songs you've done, did you have the most amount of fun doing?

We really liked playing the eighteen twelve overture from ...that one guy...what’s his name?

Was Barbie really THAT ugly?

I have no idea what you are talking about. Barbie is beautiful and looks like all girls should.

We Europeans can only dream of seeing you guys in live action, so tell us the good news: when will you be making the cross to play some European dates?

We would love to meet girls in Europe and take them out on dates!! We are building an ark made out of crystals and picnic baskets. Its going to set sail for Europe in 7 months!! So we should get there sometime in the year 2009.

Did you ever get the urge to just pack it all in and quit, because of all the villains trying to attack you during your shows?

No, but I would love to unpack my suitcase and air out my stinkables!! They are starting to really smell!

Every day.....every day I write that book, homey.

The Bat Commander’s dental records and expenses must be pretty awesome. How many teeth did he lose during his many battles with evil minions from all about, or simply landing face first doing his little flip?

He has a beautiful set of porcelain veneers that he routinely trades in for gum and stationary. All of his teeth are fake...and so is he.

With the super-hero thing and all, do you consider the Aquabats to be some sort of role models for the kids?

We can’t really call our selves role models....we don’t make enough money. Role models are responsible for showing us how to be responsible. The Aquabats are good for about 30 minutes...then the wheels start to come off.

Talking about live stuff again: Where did Prince Adam learn to play his hands? (like at the end of Martian Girl on the Serious Awesomeness DVD)

At school while he was paying attention to the sounds he could make with his hands...he discovered an important lesson....school is important to help you learn....things like making fart sounds with your hands.

What’s the reason for Adam leaving the band, and to what extent have the recent changes in line-up helped to shape the sound of the new CD?

Prince Adam wanted to join the peace corp and teach young poor children how to make music with their hands. We miss him. He did write a couple of songs on the new record but mostly he was missing.

What is Adam doing these days? And does the rule “Once an Aquabat, always an Aquabats” count in the world of the … well Aquabats?

He is, yes, a ruler. And we hope he can hear the cries of the children that mourn his loss. He will always be Adam.

Someone saw you guys play last year and there were a lot of kids parents in the crowd, they seemed to be enjoying show as much as the kids if not more, does that happen often?

Yes, but it needs to stop. If parents start to like us then we wont be “cool” anymore. Well, I guess we never were “cool” but anyway, we don’t mind. The more silly people in one room the better. Moms, Dads, Grannys...whatever!

7 guys in spandex playing to kids, does that ever strike you as weird?

Yes, It is VERY weird. But, that is were the parents and grannys come in. To make the weird bizarre.

There’s some talk about Travis Barker rejoining the Aquabats with the Blink182 hiatus and all. Any truth to that, and would you welcome that as a band?

I don’t think he would. But maybe if we pray, he will send us a fat check for a million bucks!!!

That way your current drummer can re-form the Assorted Jellybeans and I can sleep easily again. Can you please ask mr drummer guy what has become of his two fellow partners in crime of the Assorted Jelly Beans?

The other two guys are in prison for trying to break into Travis Barkers castle. They just wanted a few pieces of gold to feed their poor children, who were sick with cholera.

About the new album then: Is that Dexter Holland we hear? If so, what’s his Aquabat call-name?

No, we haven’t even met him yet. He sent us a tape of background vocals but they didn’t really fit on the songs. If he was in our band, however, I bet we could get into Travis’s castle.

The album is almost devoid of horns, except for the occasional sax. How do you expect to circumvent that in live fashion, especially on older songs?

It is easy. There is a sax playing robot who can circumvent the devoid, no problem.

I’ve also read that the ska rhythms can be somewhat limiting music-wise, was that one underlying reason as well to be done with the horns and much of the ska on the new album?

Horns have not much, if anything to do with rhythm, much to the misunderstanding of many. Ska and horns are not the same things. When you ride into battle you blow horns and there are no ska rhythms. Like wise early ska had no horn playing barbarians charging the streets of Jamaica.

How do you rank the new album “Charge!!” amongst your other material?

Number one!! But silk is a fine material that can’t really be denied.

Pleased with the initial reactions?

Yes. everyone has been kind.

Who's idea was it to put exclamation marks at the end of every song on your new album, and what is it’s significance you 'wacky' goofs?

It is a stipulation in our contract with NITRO and the government of the United States of America. We must be exciting at all times. Even when READING!!!!!! BOO-YA!!!!

I heard you just finished up the video of ‘Fashion Zombies’. What can we expect?

How did you end up on Nitro and how do you look back on your period with Fearless? Why the switch anyway?

We loved working with FEARLESS but NITRO was closer to our house and we didn’t have to drive as far. We are as lazy as we are handsome.

Who designs your merch? And how do I go about getting me one of them yoghurt/pudding dispensers?

We had some problems with the yogurt/pudding belts. They kept getting stuck on nails at construction sites and caused a few injuries. We have a team of scientists working on it.

Any idea how many cadets there are in Europe? How does it feel to have such a dedicated fanbase?

We love our fans and they are the real reason we are a band. We have the best fans of any band in the world and the smartest too.

You’ve been toying with the idea of making an Aquabats TV-show for Cartoon Network, just for the kids. Will that project ever get realized and if so what should we expect from it?

We have been trying to do it for a long time but it is like building a railroad with pancakes and pumpkins. All of the execs at various networks will be crying when we do actually launch our show. Mark my words!!!!!

Have you ever considered making a full length movie? With all the cadets buying it, it’d be a safe financial bet anyways, and a good opportunity to translate your awesomeness to a more permanent medium once again.

Is there a post-Aquabats era for you all, and have you given it some thought yet?

Retrieved from "https://theaquabats.fandom.com/wiki/Europunk_%3F%3F/%3F%3F?oldid=3456"
Community content is available under CC-BY-SA unless otherwise noted.