Crash McLarson is the bassist for The Aquabats. He is one of two founding members of the band still in the line-up. He uses his emotionally-based super size to fight crime - when he's not too scared of his own shadow, that is.

Crash is the biggest of The Aquabats in height and seemingly in weight. He is pretty muscular, but in a real way, not a body builder way.

He usually has a shaved head under his Anti-negativity helmet.

Despite being overly emotional and slightly dim-witted, Crash is the kindest and most good-natured member of The Aquabats born and raised in California.

In his origin cartoon, Crash tells about meeting the other Aquabats on his first day of public school. He was afraid of getting bullied, and sure enough, when he introduced himself, he was mocked by the tough kids in school, The MC Bat Commander and EagleBones Falconhawk.

At recess, Crash began talking with two other new students, Ricky and Jimmy, who convinced him to go trash talk the two bullies and challenge them to a playground gladiator match. Although Crash's trash talking wasn't the best, the fight was underway. Ricky, Jimmy, and Crash backed the Commander into a corner, only for him to congratulate them, telling them they'd passed their test, an initiation into the Aquabats, a "ragtag group of rock and roll freedom fighters dedicated to protecting the world". The new quintet then set off to "rescue" a carton of chocolate milk from another student.

Crash possesses incredible strength, in the episode Summer Camp!, he easily lifted a large boulder over his head.

Crash has the power to grow up to a hundred feet tall; unfortunately, this ability is tied to his emotions. As such, whenever he gets mad or upset, there is a risk of him growing.

This is usually accompanied by his cry of "GETTING EMOTIONAAAAAAAAAAAL!"

Crash considers his fellow Aquabats to be his best pals, never hesitating when it comes to protecting them, and gets enraged when someone tries to hurt them. When they were under attack by ManAnt's giant ants, Crash, in a rage, grew to a gigantic size and kicked away the giant ants.

When EagleBones made Crash think that Ronmark had broken Jimmy, Crash yelled in anger, grew huge, grabbed Ronmark, yelled "YOU BROKE MY FRIEND!" and chucked him into space. During the cartoon interludes of season one of the Super Show, Crash puts himself on the line several times in attempts to save Jimmy.

Crash is easily frightened by scary things, and usually states that "I hate ______" when he's afraid of it.

Oddly enough, Crash is not afraid of zombies. He isn't able to tell the difference between them and mummies until someone else points out the difference.

Chad brings punk rock fury to the band, as his background dips deep into the early eighties LA punk rock scene. Until they broke up in 1997, he was the bassist for B.H.R. (which stands for different things depending who you ask).

Chad is a professional electrician and lives with his wife and four kids in Huntington Beach, CA

Crash plays bass and and is currently one of the only two remaining founding members. Though during the first handful of Aquabats shows he played trombone. He is considered second in command of the band by some. He is the strongest of the Aquabats and can smash any foe with his punk rock fists. Also, he can grow larger... a bit.

Crash McLarson, the most punk rock bass playing super hero known to man, began his quest to fight evil and be in a rock and roll band at an early age. Now a little older, Crash is the muscle behind the band and the man most likely to break something whether you want him to or not.

Crash is a fierce fighter and is very loyal to his band mates when push comes to shove. Crash can sometimes be a little lazy and overconfident and at times a bit of a bull in a china shop, but always means well and is a great friend to the band and their fans. Crash is also the most emotional Aquabat and can burst into tears and grow 50 feet tall at any given time.

And it came to pass in the seven hundredth year of the reign of the Adams that Lothar McLarson and his posterity were granted the land in the southeast.

And it was good with Lothar and he prepared with much rejoicing for the journey to the new land of his inheritance.

Now behold, the land in the Southeast was inhabited by a race of wild men who lived in the hills. These wild men ate nothing, save it were raw meat and Cracklin' Oat Bran. And they rejoiced in their suffering.

Now, behold, these hill people were covered in much hair and stink and were called the Hardies. And they were a bloodthirsty generation and stood eight cubits tall.

And it came to pass that in the sevenhundred and first year of the reign of the Adams,

Lothar descended upon the land of his inheritance and made camp near the seashore on the edge of the cliffs.

And Lothar dwelt in a tent.

And it came to pass that the Hardies of the hills were stirred up unto much anger against the McLarson Clan. Insomuch that they did descend upon the encampment with expedient force.

And many McLarsons were slain. So many, insomuch that great was the stink

And the Chief of the Hill People had a conference call with Lothar, chief of the McLarsons.

Insomuch that he demanded fifteen percent of all of the McLarsons' increase. And in return their lives would be spared.

And this is the epistle of Lothar McLarson to the chief if the Hill people:

"Thou hast killed many of my people without reason or warning. When we have done nothing to thy people save it were only casual glances at your women.

For behold, this land is rightfully our land of inheritance, given to us by a proclamation of the king of all the land northward.

Now, we do not suppose that thou canst incur thy yoke of bondage of fifteen percent much longer, or we will rise up against thee with much force and wrath.

How long must we endure this dreadful scene? How long must we see our wives and children suffer empty plates and barren fruit baskets while thou and thine people hog up all the Crackin' Oat Bran?

I sayest, No longer! For we shall raise up an army against thee and end the conflict."

And so it was, the Lothar and his people took up arms against the Hardies and smote them with exceeding rage.

And it came to pass that after much bloodshed upon the land, that Lothar smote the head of the Chief Hardie, insomuch that his teeth fell to the earth. And the birds rose out of the sea and pecked at his flesh until he was consumed.

Having seen this, the Woolly Hill People were stricken with fear and ran to their final deaths off the edge of the Great Cliffs.

And there was peace in the land.

Yet even to this day, there lies a discount hot dog stand below those Great Cliffs of which I have hitherto spoken in memory of that great battle.

And it came to pass that Oglok begat Mobius McLarson.

And Rumchur begat Jonathan and William and Catherine.

And Catherine bore up a great nation, and that nation was....

CRASH MCLARSON, THE BASS PLAYER FOR THE AQUABATS! 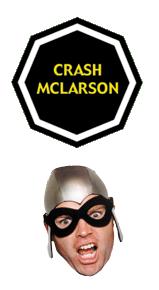 Place Of Birth: The Highlands, Aquabania

Weapons: An incredibly big fist, morning breath of horror, and a couple of bass guitars

Can Destroy absolutely anything.

Community content is available under CC-BY-SA unless otherwise noted.
Advertisement