Start a Wiki
One of the newer villains in Aquabats history, CobraMan made his first appearance while the band was on tour in Japan. He is an anthropomorphic cobra with two snake heads for hands, and is usually orange in color.

While his reasons for attacking The Aquabats and his origins are currently unknown, CobraMan appears to understand best where The Aquabats get their power: The Kids. In most of his attacks at shows, he doesn't directly attack the band, but instead attempts to destroy The Kids, who are usually saved by The Aquabats.

More recently, he was the featured villain along with Carl in CobraMan!, the 12th episode of The Aquabats! Super Show! 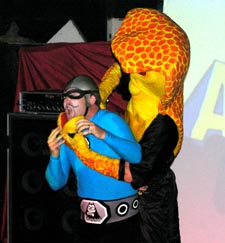 Cobra Man has made attempts to disrupt Aquabats' shows at the following venues:

Video attack on The AudienceEdit

One of Cobra Man's best known attacks on a venue was his missile attack, which he attempted on a variety of venues. The attack would start with CobraMan hacking into the video system of the venue to issue a warning that he had just launched a destructive missile that was heading right for the venue in an attempt to annihilate The Kids in the audience. The MC Bat Commander would then leave the stage, running the entire way (with only one break) to CobraMan's lair. Once there, the audience saw him duke it out with Cobra Man, a skirmish which included The MCBC throwing a fork into the eye of one of Cobra Man's snake hands.

Once Cobra Man was successfully nullified, The MCBC then proceeded to hack into the system in order to figure out how to disarm the missile that was getting ever closer to the venue. With his computer hacking skills, he deduced that he either needed to press one of two buttons on the console, the red one or the green one. Using Cobra Man's camera to communicate with the kids back at the show, he asked the audience for their opinion of which button he should press. After following their advice, the missile exploded midflight and the day was saved.

In The Aquabats Super Show!Edit

The Cobra Man was the star (and apparently the only) attraction at a rundown carnival operated by Carl. Carl lured the Aquabats into a tent with promises of letting them see the Cobra Man, then collapsed the tent on them and stole the Battletram to show Cobra Man on the road. The Aquabats pursued in Carl's convertible, but were distracted by Cobra Man shooting snakes out of his hands and into the car, which freaked the Aquabats out enough for Carl and Cobra Man to get away.

Later the Aquabats found that Carl had converted the Battletram to be a roadside attraction where he could show off the Cobra Man to tourists. They snuck aboard and a fight broke out between the Aquabats, Cobra Man and Carl, who bet the The MC Bat Commander he couldn't win a fight with Cobra Man by himself. The Commander accepted (as he could never turn down a bet), and Carl sent him and Cobra Man to the desert for a fight to the death. The MCBC did eventually defeat Cobra Man by sneaking up on him and putting him in a sleeper hold, but let Cobra Man go after the monster bet the Commander that he wouldn't. Cobra Man (who until then had been a mute monster) promised to free his friend from jail at the soonest convenience before slinking off into the desert.

This article is a stub. You can help The Aquabats! Wiki by expanding it.

Retrieved from "https://theaquabats.fandom.com/wiki/Cobra_Man?oldid=12138"
Community content is available under CC-BY-SA unless otherwise noted.