The Aquabats! Wiki
Register
Don't have an account?
Sign In
in: Enemies, People, The Aquabats Super Show

His name is likely a reference to the Crispin Glover song of the same name.

Clowny Clown Clown's head is a piñata, which is white and has strips of colorful paper possibly meant to resemble hair. He also has a party hat, made of paper as well. He has blue eyes and lips, and a red clown nose.

During the 90s, Clowny wore a vintage, half-black half orange clown suit. But in RadVentures, he wears a colorful suit jacket, with a polka dotted clown suit underneath.

Clowny Clown Clown is the host of his own television show, named after him. It's Jimmy and Crash's favorite show. It's meant to be a musical children's show, with songs about puppies and candy which encourage the viewer to sing along. Jimmy states that this show "Has a lot of educational value", despite Clowny immediately saying the phrase "Remember kids, if your friends don't like me, they don't like you!".

Later on in the show, he tells the audience to send him an e-mail so they can win a free trip to his studio to eat candy pie, except for Ricky Fitness, who has a fear of clowns.

Clowny and Crash during the 1999/2000 Aquacadet Summit 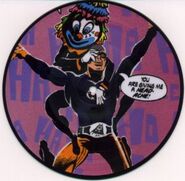