The Aquabats! Wiki
Register
Don't have an account?
Sign In
Advertisement
in: Band Roster, People, The Aquabats Super Show

Chainsaw the Prince of Karate

Chainsaw, was a legendary core member of The Aquabats from 1995 to 2006. His powers of Kung-Fu and woodworking were well known all throughout the land. Chainsaw wielded his guitar much like he did his nunchucks - with authority! There was not a child in the village who did not know the magnitude of his powers and did not respect him greatly. It is for this reason that his tragic buzzsaw accident in 2006 broke the hearts of many.

Chainsaw is credited for writing and singing the B-side song, The Lonely Horseman.

The Legend Of Chainsaw[]

It just so happened, Chainsaw Karate was born to a humble family of woodcutting martial artists deep in the hills of the Southbay. He was born in a lodge made of sticks and moss and with one sigh of relief, he was born. And so it was. Chainsaw was born...one day.

From the early stages of he game, it was apparent that Chainsaw had juice. That's right, homeboy. Juice. In his small hamlet of wood-chopping martial artists he soon became known as the child prodigy, Woodchop Master. He was only five months old.

One day in a fit of rage, Chainsaw sold his family heirloom toboggan (widely used by wood-chopping artists for such useful tasks as transporting logs and sliding down snow-covered hills in the winter time.), and was thrown out of the lodge by his father, Jerry, who was very upset.

Now homeless, friendless and beardless, Chainsaw made his way down to the local country fair and jamboree where he planned to spend some of the $73.48 he'd acquired from the sale of the family heirloom toboggan. First he bought a ticket for the pancake batter chug-a-lug to be a contestant. The ticket was $10.00,and the contest started at 4:00am the following day. Then he bought a trick dog leash with an invisible dog on the end for $7.99. After that he bought some indian jewelery, a turquoise buffalo chip for $34.95. Chainsaw then entered a hair farmers contest and the entrance fee was $9.99. With the average tax rate at 6.34%, how much did Chainsaw have left before winning the Pancake Batter Chug-a-Lug?

Well, that doesn't really matter, because just then, Chainsaw heard something that changed his life forever. There in the pavilion, he saw his future. A band called The South Bay Surfers were playing "Wooley Bully" with such . . . commitment, with such. . . majesty, that our young woodchopper knew he wanted to make rock 'n' roll guitars, and play them for his new heroes, The Aquabats! 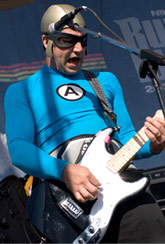 Strength Level: Pretty much down there

Defender of the Mighty Battle Axe

The Aquabats vs. The Floating Eye of Death:

Watch out for Chainsaw's karate chop! One swipe can turn a pile of logs into a wicked rock 'n roll guitar!

Corey Pollock has been a guitarist with the Aquabats since 1995. He has played lead guitar on every album up until Charge!! Though, even if becoming a non-touring member, he played additional guitar on "Hi-Five Soup!". He plays Viking guitars. He was known back in the day for lighting a sparkler at the end of his guitar and playing as it went off. Corey had several side projects during and after his Aquabat days, including playing for Dig Bunee, Supernova, The Blue Whales, and The Goodwin Club (Who he still plays with). Corey currently runs his own custom kitchen business in Long Beach, California, with his wife Daiquiri, and their daughter Charlotte.

On Dec 8th, 2000, a busy business college student Chainsaw announced that his last show would be the 22nd of December, when the Bats opened for the Vandals Christmas Formal in Anaheim, California. Chainsaw decided to come out of retirement and play one more show, the benefit for the Seaghost, June 22nd at the Glasshouse in Pomona, admitting that "having your last show opening for the Vandals seemed kind of retarded." After this the Aquabats launched an online search for a new guitarist. The guitarist Macaroni attempted to fill in, but didn't work out. Things for the Aquabats slowed down, and Chainsaw decided to stay with the band. Ironically, he never missed a single show.

When The Aquabats were between record labels, Corey had plenty of time to focus on managing his business while playing shows here and there occasionally. With the release of Charge!!, things with the band suddenly picked up. Full tours made things too busy for him and he realized that he needed to give up the band. During this time Popeye toured with the band to play rhythm guitar. He was finally able to make the break permanently, yet amicably in 2006, to be officially replaced by Bones. On December 8th, 2006, Chainsaw was invited on-stage to perform a memorable 'last song,' Lobster Bucket!, at the El Rey Theatre in Los Angeles.[1]He admitted that he had been missing out on a lot of fun since his departure. Over the next couple of years he would occasionally rejoin the Aquabats on stage, at shows such as a benefit show for friend Tony Carbone, and filling in when Bones was on his honeymoon. Chainsaw was not involved with the writing process for Hi-Five Soup, but he said that he played on most of the album. He was playing with the band as they toured for hi-five soup! Also he recently came back to the aquabats along with fellow Fallen band member including Catboy, Prince Adam, The Baron Von Tito and current band members the mc bat commander, crash mclarson, Eaglebones falconhawk, jimmy the robot, Ricky Fitness for two shows at the fonda theater and at the baron von titos/travis barkers back to the beach festival for the 20th anniversery of their best album ever(non arguable) The fury of the aquabats as they played the whole album front to back(they only did a couple fury songs at the back to the beach festival because they had a short ste because its a festival) and a couple other songs as well. Since then he has appeared at many diffrent show with the aquabats including one at the El Rey Theater where Weird al and puddles pity party where there heres the link https://www.youtube.com/watch?v=qGj7-dPMUw4 and another song from the show https://www.youtube.com/watch?v=pUMS4yY243A if you want to watch it.

In August 2008, the Costa Mesa Punk band Supernova announced that Corey would become their new guitarist to replace Jodey Lawrence. Corey had been a long time fan and friend of the band, and it gave him the chance to remain playing music for a band that is not as busy. For 3 solid years, Corey, still partaking the stage name of Chainsaw, played guitar at live shows and helped write some since unreleased material with the group. Supernova also opened for The Aquabats multiple times during this period, with Chainsaw sometimes playing guitar for both bands sets at these shows. After the end of 2010, The band then went on an unexplained hiatus from performing live.

In 2015, Supernova played a handful of reunion shows with 1995 member Jodey Lawrence back on guitar. So while Chainsaw is currently not a member of the band, he remains close with his now former bandmates Art Mitchell and Dave Collins.

Chainsaw made a cameo appearance during Showtime!, the first season finale of The Aquabats Super Show. He appeared alongside Catboy as rival/fellow superheroes to the Aquabats, and briefly teamed up with them to fight the alien menace. This team up was short-lived, though, as about 7 seconds later Super Magic Powers Man appeared to save the day, at which point, Chainsaw and Catboy left out of despondency. His appearance changed dramatically for this episode, as he sported a gnarly beard, lumber jacking attire, and a sweet chainsaw for his right hand which he fired up when he was about to butt heads with the MCBC.

1/4
Community content is available under CC-BY-SA unless otherwise noted.
Advertisement