Catboy played trumpet and contributing back-up vocals with the Aquabats until 2001. He was known for his feline-like agility, super lips and ultra logic. Legend has it that he originally hailed from anchorage, Alaska.

Wildlife: It is filled with many indigenous creatures, such as the rattlecat, the bubblerabbit, and the catsnake. 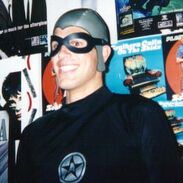 Catboy: Catboy was selected by a majority vote to represent Cataloopis in the National Log Races of Aquabania. Thrilled to represent his log, Catboy packed his hot dogs and left for the Log Jamboree. Due to corruption on the Log Race Committee, the race was canceled, pending an investigation by local log-istic authorities. Hell-bent on launching his log, Catboy joined his fellow countrymen from the other provinces of Aquabania, who were embarking on a long-distance log jam. Little did he know the final destination of this expedition....

Currently, Catboy is a member of the Aquabanian Log Racers, now known as the Aquabats. Catboy hopes to return home someday and start a family.

The Return Of The Aquabats

The Fury Of The Aquabats

The Aquabats Vs. The Floating Eye Of Death

Boyd was a founding member of The Aquabats and contributed very much to the band. His older brother is an owner of Aleeda Wetsuits, where Boyd was employed at the band's inception. Scraps of neoprene and lycra were sewn together by Boyd's crafty hands to create the bands costumes. Boyd currently works at RVCA Clothing and occasionally plays trumpet with GOGO13. Until recently, he was last seen performing with the Aquabats on December 18th, 2009 at the Henry Fonda Theatre, Hollywood, CA.

On October 13, 2017 he was found once again at the House of Blues in Anaheim but soon vanished again. A few months later, on April 7, 2018 he reunited with The Aquabats again for the Fury Of The Aquabats 20th Anniversary show at the Fonda Theatre in Los Angeles, CA along side other lost members including The Baron Von Tito, Chainsaw, and Prince Adam.

Catboy made a cameo appearance in the season 1 finale: Showtime! He appears alongside Chainsaw the Prince of Karate.

In this appearance, he dresses as a black cat and shows contempt for The Aquabats for trying to steal Chainsaw and his glory.

1 of 7
Add photo
Retrieved from "https://theaquabats.fandom.com/wiki/Catboy?oldid=13359"
Community content is available under CC-BY-SA unless otherwise noted.