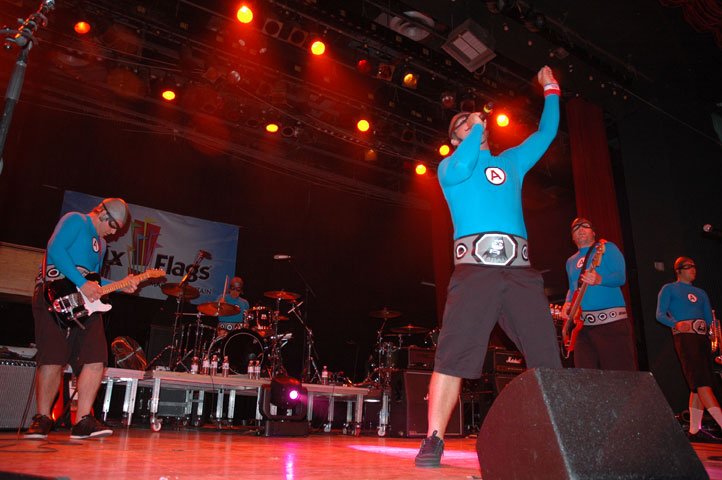 August 31, 2009 NEWS FLASH!! MAGIC HAPPENS AT MAGIC MOUNTAIN! In case you missed it, the Aquabats made a historical appearance at California's Six Flags Magic Mountain this past weekend. A few friends were on hand to witness the intimate performance that has been described as 'breathtaking!' So great was the performance that four people threw up immediately after the show. "i just couldn't contain it anymore!" said one sweaty super fan. "I got sick from too much joy!!", said another unnamed Aqua cadet. We are all sure that the symptoms of Too Much Joy syndrome were induced by the fact that ... CHAINSAW and CATBOY.. returned to the stage to play a full set with the band! that's right original guitarist Chainsaw the Prince of Karate was there to hold down guitar duty while Eagle Bones Falcon Hawk was out on a HoneyMoon vacation in Paris!!!! Congrats to Eagle Bones and his lovely bride Ashlyn! They are so cute together!! Catboy the trumpet playing hybrid humanoid was also there with Jimmy the robot playing along to all the hits... SUPER RAD, CAT WITH TWO HEADS, RED SWEATER and MORE! It was really fun to play with our homeys again! Especially since we thought CATBOY was dead.. HOORAY! FOR NOT BEING DEAD!!

There are pics floating around proving that this really happened.. check some more here!!

The show was great and made us realize how much we like being the Aquabats! Maybe we shouldn't break up!?! Anyway, one thing that made us feel really sad was when we were playing there were a small group of fans in the front that just sat there and didn't even dance.. what a shame.. it's seems weird that they would come really early and then stand in line for a super long time and then just sit down the whole time because they were on the front row.. At first we thought that maybe they were rock snobs but then we realized that they were probably just tired from getting to the park so early to assure their positions in line. Way to go dudes! You won!

Plans are being confirmed now for a big blow out reunion show at the GLASSHOUSE on SEPTEMBER 12th! Get your plane flights booked now and get your tickets! this is going to be fun. Rumors have it that the band will be playing together again with some old friends and some new surprises!! BE THERE!! BUY TIX NOW!!

THE AQUABATS ARE GOING TO AUSTRALIA!! That's right super fans after 30 years of being a band that only a mother could love. the Super Ugly ducklings of rock are finally heading down under for the SOUNDWAVE FESTIVAL! Click here for a link to the line up and the full awesomeness!!

This is going to be great! Now, if we could only get a record deal! that would be the best!!

Be at the GLASSHOUSE!

Retrieved from "https://theaquabats.fandom.com/wiki/2009/08/31?oldid=11514"
Community content is available under CC-BY-SA unless otherwise noted.