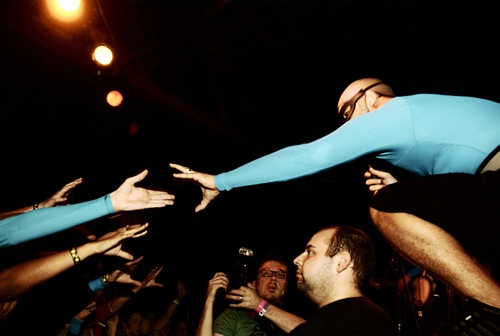 This week marks a the beginning of tremendous weeks ahead for the AQUABATS!! This year will be one of the greatest tests for our not-so-young-herculeezes on their quest for the rad-nugget of rock n' roll gold! First, this weekend, BAMBOOZLE!!, the festival that leaves you thinking you might have been swindled, will be the kick off of the Aquabats WORLD TOUR FOREVER 2009!!

That's right! The BAMBOOZLE FESTIVAL, Saturday, April 4th, click here for info! From what we can tell, it looks like it's shaping up to be the best festival in Irvine, California this weekend...in the WHOLE WORLD!! Then, like bolts of greasy lightning, the Aquabats quickly get on a plane and head out to Texas, where they will be playing a private benefit show for a wealthy cattle rancher with too much beef on his hands!! Come n' get it!! YEE-HAW!!

After, the EASTERS holiday, our boys in blue will then be taking on Anarchists and protesters in the UK with a short tour of the British isle! OI! OI! OI! to say the least... I am sure those anti-nice people protesting there now will have no chance of overthrowing the Aquabats' will to rock!...And you can take that to the bank! (snort!) Then in a final triumph of will, they fly across the continental street to the grand stage of Belgium for the GROEZEROCK festival! Click here for even more awesome info!!

Just when you think things couldn't get better...you are right...they actually get kind of...worse... Hang in there kids, we have a bit of bad news for the first time in News Update history. Due to trying economic times and a struggling musical landscape, the Aquabats have been officially released from Nitro records. In what appears to be a mutual agreement to part ways, the Aquabats have nothing but fond memories of the 'Nitro' years. Who could forget the release of the album 'CHARGE!!!" or the special one year anniversary release of "CHARGE!!!"? Who could forget a successful tour of Japan with the owner of Nitro records own band 'The Offsprings'? And best of all, who could especially forget the delicious hot sauce we all received as Christmas gifts from Gringo Bandito?! Sure beats an Ipod or a set of DVD's!!

While fond memories remain, stark reality faces all of us kids... No record company, no record. That is right kids, although we have been hard at work trying to find the formula for the greatest album ever made....by the Aquabats, we now have no outlet in which to launch such treasured tracks as, 'The Moon is a Circle of Ghosts', 'Funky Doodle Dandy', or 'Dance Posse Girl'. Sadly kids, we don't know what to do. I think its time we all roll up our sleeves and decide to either pack it up and call it quits, OR by some miracle of hard work and perseverance ...we ... persevere!

BUT!! We can't do it without your help kids!! Please email your Prime Minister, Chancelor, Emperor or President Obama to help us with a 'BAILOUT the AQUABATS! STIMULUS PACKAGE!!' We realize that if we are bailed out by a government that that particular government will now own the Aquabats future, BUT who doesn't want to be owned when it comes right down to it? RIGHT? KIDS!! THE AQUABATS ARE JUST TOO BIG TO FAIL!! PLEASE HELP US FIND A NEW LABEL!

Here is a list of labels that may want us...but also may be going out of business:

We'll see what happens, but in the meantime! CADET KITS AND CADET SUMMIT ANYONE?? It's been a few years since the Cadet Summit and ...heck! We should do one. I heard a saying once, "When your hour looks darkest....throw a party!!" And gosh darn it kids! You deserve a party! New Cadet Kits are almost ready and Cadet Summit dates are being decided as we speak! Stay tuned for more info, and keep you fingers crossed that we don't get hit by a bus!

In other positive news, the Aquabats are still the best band in the world....seriously... We love you guys, see you soon....very soon!! THE AQUABATS!!

Retrieved from "https://theaquabats.fandom.com/wiki/2009/04/02?oldid=11510"
Community content is available under CC-BY-SA unless otherwise noted.