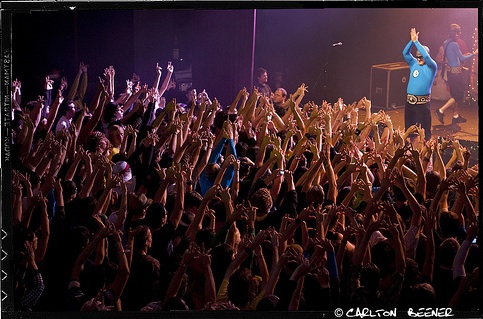 Happy new year and all that! WOW! This being the first official news update of 2009 is so exciting! It's especially exciting because of the hot winds of change that have blown into this great country and created a NEW AMERICA!! It's so awesome to think about all the wonderful things that are really going to be different around here....for a CHANGE...(pun intended!). Everything will be free! No one will commit any crimes! Peace will reign! Racism is dead! And best of all no other countries or planets will want to attack us because our new president is cool! I HOPE ...HE .. doesn't CHANGE!! (Get it? Hope and change in the same sentence? Genius! ) Reprezent!!

My only HOPE (snicker of joy) now, is that we -the Most Awesome Powerful Band of Fearless Do-Gooders known to ROCK- won't be out of a job now that all our problems are going to be solved! Let's hope there are still a few things for us to battle in the years to come. Like maybe we could be the 'Protectors of Those Who Prefer Un-Burnt Toast' or 'Defenders of those who only have wrinkley money and can't get change out of change machines!!' What about, 'THE NEW CZARS of Marshmellow Peeps for a New Generation!'?

Either way, I am certain that chubby superheroes will have a place in the new utopia that is our NEW WORLD! Maybe we should just make a new album and go on tour?!? Finally!! That is right kids, after WAY too long, we are ready to go into the studio. At the end of the month we will begin recording the new album of the NEW WORLD! Super producer and super man Cameron Webb will return at the helm to steer this ship of fools right into the rock of ages!! YEAAHH BOYEEE! Nitro Records will actually pay for it as well!! Whether it comes out or not doesn't matter because at the beginning of March....IT WILL BE DONE!!! So hold on tight kids, this is gonna get sweet like a pickle in a honey pot!! Tentative titles for the album exist but right now we are really liking the title, 'RIDICULICIOUSNESS!!....of the Aquabats!!" Some early song titles are, "The Legend is True!, "Pink Pants!", 'Teenage Workout Song!' and 'Lazer Train!' With titles like these who needs songs! Just imagine the song, "Creepy Eye!' or 'Let's Go to the Witch Hunt!' There just isnt any bands out there right now with as much flavor and juice as the Aquabats! You are thinking...Class Act? You are correct..!!! GOOD JOB!! YOU WIN AGAIN!!!

Then lets go to Belgium!

This is just the tip of the iceberg kids cuz when that new album drops its on!! We will be adding more dates through out the whole year...and a whole new show!! For a NEW WORLD!! YEAH!

Next item of news is check out these hot links...!!! They are skin burning live photos from our last tour!! SHRED!!

ALSO be on the look out for a brand new upgraded Cadet kit and items for Cadets and non cadets alike!! We will be launching the new kits and items on April 1st!! Yeah, we know, April Fools' Day....yada yada. Well, you would be a fool not to get up on some cadet merch!! HAH HA!

Speaking of hilarity, Eagle Bones Falconhawk, guitarist of the new revolution of the new world, has made it clear that this is the year the Aquabats cement there foothold in the Mount Rushmore of Rock!! You will see kids things are looking up and we are going to be there .....with sunglasses on!!! Word to all.... and peace to brothers, sisters and childrens of the new world order.

Your soon to be out of work heroes of all time, THE AQUABATS!!

Retrieved from "https://theaquabats.fandom.com/wiki/2009/02/09?oldid=11509"
Community content is available under CC-BY-SA unless otherwise noted.