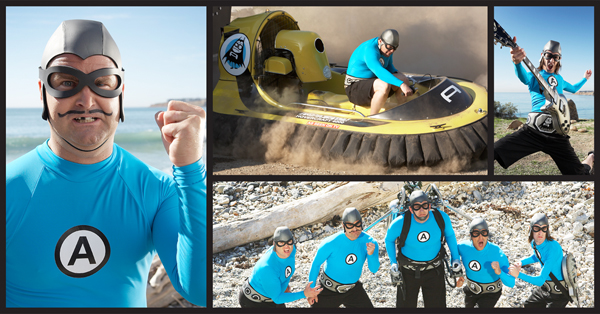 After months of anguish and pain the AQUABATS! return to world! Battle tested, ready for action and yes, a bit rusty, we are back and have a great bunch of news for all of us kids!

Here we go! First let's start with the AQUABATS! SUPERSHOW! This spring the Aquabats completed a pilot for a new television show based on the misadventures of rock and roll's greatest super dude men. Talked about and developed for well over a decade, the pilot is finally finished! So let's have a premiere! The AQUABATS! SUPERSHOW! TELEVISION PILOT will have a special screening at the San Diego House of Blues show on July 25th, 2008. If you already have tickets, you are STOKED! If not, better gets tickets now. The Aquabats will be playing that show and making some special appearances at Comicon in San Diego that weekend so make sure and "don't miss it!" Also appearing that night will be Dj Lance Rock from Nick jr's Yo Gabba Gabba! and super radman MC LARS! It's gonna be a historic occasion to say the least! BE THERE!!

If you don't get tickets in time, Don't PANIC! We are going to have a special SUPER SHOW! contest starting this week. First prize is a pair of backstage passes for the big show in San Diego, as well as a hang out with the band and special Aquabats! Super Show! tee shirts and stuff! Here are the contest details: Each week leading up to the Super Show! we will release a new clip of the pilot online, whoever can get the most people to watch the clips and trailers for the show by the 23rd of July will be the winner of the grand prize. Second and third prizes will also be awarded but only first prize gets the backstage passes and night with the Aquabats! More details, including official rules etc. will be announced on our myspace page and the forum! Keep checking in for the trailers and the updates! Good luck kids!

In other radness, the Aquabats just got back from a show opening for the legendary RANCID band. Tim, Lars and Matt with new drummer Brandon were great hosts and played amazing. Best Rancid ever. We will be hooking up with the East Bay's finest again for more shows in Los Angeles and San Francisco!

Speaking of upcoming shows! Here are some more tasty nuggets! We'll be playing August 15th and 16th in Pomona and in ....(drum roll...please)..VICTORVILLE!! That's right just when you thought Victorville couldn't get any more exciting, The Aquabats return!! Hooray!!

And if that weren't enough!! Sit down, if you're not already. Every year the Aquabats have a Holiday tour at the end of the year! A year end celebration to ride out the holidays into the new year! Traditionally, these shows are a West Coast deal but not this year! That's right kiddies! This November the Aquabats will stage the very first EAST COAST HOORAY FOR THE HOLIDAYS TOUR!! So far we will be coming to Boston, New York, D.C., Philly and (here it comes...) will FINALLY return to Florida for some specific shows on this tour! The official tour dates and bands will be announced as soon as they are locked, which should be in the next week or so! So save your coins kids! We're coming to have a year end tour for the first time EVER!! HOORAY FOR THE HOLIDAYS!!

As shooting for Yo Gabba Gabba wraps up this summer the Aquabats should be back at work on the long over due follow up album to 2005s CHARGE!!! record. Hopefully, we can get it all in the can before we head out on the road this fall. We can do it!!

Speaking of overdue. The New and improved Cadet Kits will be available very shortly. Each Cadet kit will come with some new items including a welcome to the team DVD starring the Mc Bat Commander and cameo appearances by the rest of the Aquabats! AWESOME!!! FINALLY!!! That brings up Cadet Summit which if all goes well should be announced by the time we have our big premiere in San Diego! Go cadets!!

The New Website is coming together finally! Thanks to the help of Sheriff Benson, Mr. Void and Popcicle the site is gonna get better and better as we get going again now! Hoo-ra!

Back to school merchandise is coming soon! Very soon! Stay tuned for an August preview to blow your mind! Or at least some candles on your cake...cuz it's gonna seem like ...your birthday....or something.... ..ok...uh...AWESOME!!

Well there is so much more we want to share and show you all but hopefully this is enough to get some dusty motors running again. We have been so busy with production and projects it's been real hard to give you guys very much. But again, guys we will never forget that you are all really the aquabats and we can't do this with out you all. It's nice to be back. Get ready for the Golden Age to begin all over again! We love you guys. Welcome back......welcome back.

The M.C.B.C. and the AQUABATS!

P.S I almost forgot to include this! Check out this guy! Totally RAD! Way to go Rob! I need one! Keep up the radness homeys!!

Retrieved from "https://theaquabats.fandom.com/wiki/2008/07/14?oldid=11504"
Community content is available under CC-BY-SA unless otherwise noted.