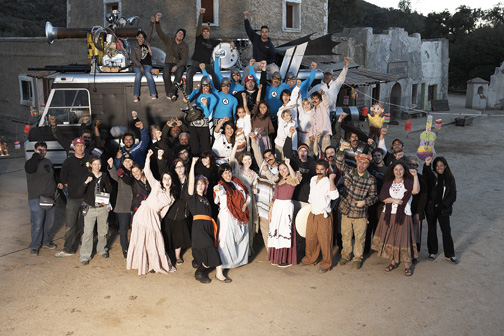 Shooting officially wrapped this last week on a pilot episode for The Aquabats' newest attempt at snagging a television show based on their many mis-adventures. "Early video transfers look really good and we may have gold in a bucket." says Scott 'Sea Ghost' Schultz, co-director and co-creator of Nickelodeon's Yo Gabba Gabba pre-school television show. The Aquabats' bass player Crash McLarson also interjected enthusiastically with, 'I think...someone... is gonna like it." With early reviews like this, how could it not be a hit....for somebody....somewhere. The show is neck deep in the editing phase and hopefully will be done by mid to late February!! HOORAY!! Check out some photos below!! 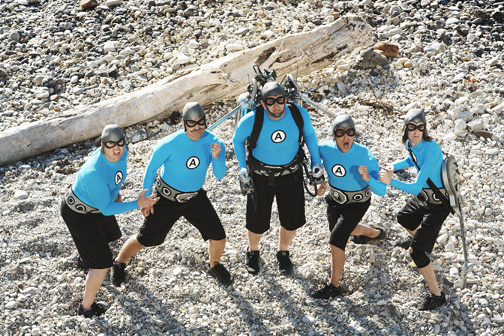 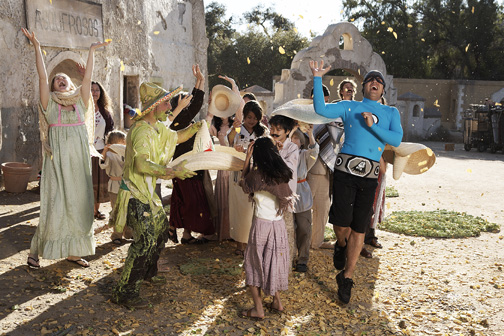 With principal shooting finished and well into post production, producers have realized that in order to finish the show certain props and items used in the production will need to be sold to offset the costs need to finish the show. So we are going to be auctioning off some key props from the show for any collectors out there. Sadly, we are even gonna have to sell this bad-boy, the AQUABATS' BATTLE-TRAM! WOWZERS! Check out this beauty!! SHEESH!

We also want to thank everyone for coming out to the show at the El REY in L.A. for the shooting of the concert sequences! It was really fun and FREE! Thanks everybody for attending a 6 hour concert...the energy was great the whole time and it really looks good on film!

NOW FOR SOMETHING REALLY IMPORTANT!!

A few months ago, our friend Tony was diagnosed with cancer. This article should get you up to speed on his situation HERE.

Tony is a great guy and an awesome musician and songwriter and has been playing shows with his band BIKERIDE from way back with the Aquabats. This weekend, we would really appreciate your help in attending a special concert to help him and his wife get through this tough time. He is an elementary school teacher as well and has a class full of kids waiting for his return. PLEASE come to the show and help to donate for this worthy cause. Our good friend- Chainsaw- the Prince of Karate will be hosting this worthy event and our great friends SUPERNOVA and FLUF will be there as well. KIDS, WE NEED YOUR HELP!! SERIOUSLY! Please come out. Ticket prices are a little steeper but ALL proceeds go to help Tony get better. THANKS! Check out more info at Tony's BENEFIT SHOW Myspace.

The Aquabats will be in New York to showcase parts of their new Pilot and play a show on the 13th of Februrary. The band will perform for whoever shows up and for the list of industry who's who and delegates that have been invited. It sounds rad...because it is RAD!! Come out and be the first kids to see clips and segments from the Aquabats' NEW SUPER SHOW!! Details are here.

Well, that is about it for now. Please try to make it to both shows...you know just in case...

Retrieved from "https://theaquabats.fandom.com/wiki/2008/01/31?oldid=11503"
Community content is available under CC-BY-SA unless otherwise noted.