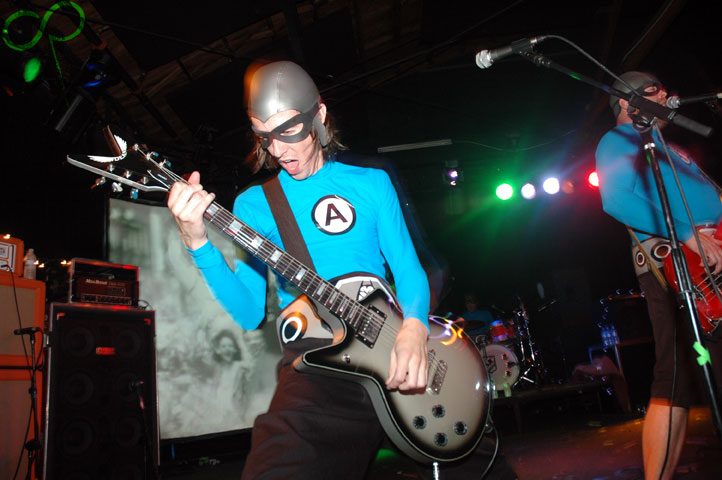 Hello kids, and happy new year! Things have already started off with a major BANG this year as THE AQUABATS! are in full productivity mode already!! WOOP WOOP! As well as working on our new album, working out and knitting mohair sweaters for the foreign legion, THE AQUABATS have finally saved up enough money to make their own TV show!! Hooray!!

Well, maybe not a whole TV show, but at least one episode! We wanted all of our most faithful friends and allies to make an appearance in the show and that is why to kick of the new year we are inviting all cadets and non- cadets alike to join us next Saturday the 12th of January at the EL REY in HOLLYWOOD, to be in our new TV show pilot!! It is gonna be totally super radical!! And even better -- it's gonna be FREE!!! That is right, homeslices and cheesebreads, come on down to the EL REY next Saturday morning, the 12th of January, to attend a free show and a taping of the new Aquabats TV pilot!! WE NEED YOU!! We will start taping at 1pm so we will need everyone there by 12:30pm. More details will be announced soon.

There will be two lines out in front of the EL REY -- a CADET line and a NON CADET line. So bring your Cadet cards because Cadets get in first!! Be sure and wear your best Aquabat gear and brightest new wave clothes to make sure you can see yourself in the show!! It's gonna be like a crazy fun Cadet Summit that isn't a Cadet summit but an Aquabats free for all!!! YEESSS!! But remember -- Cadet card holding members will be admitted first!! PERKS, DUDE; PERKS!! It will last a couple of hours, so be ready for a long day!! At any rate bring all you friends and neighbors cuz it's 2008 and the future is now!! Well that is it for now but stay tuned for more news and radness at theaquabats.com!!

Retrieved from "https://theaquabats.fandom.com/wiki/2008/01/05?oldid=11502"
Community content is available under CC-BY-SA unless otherwise noted.