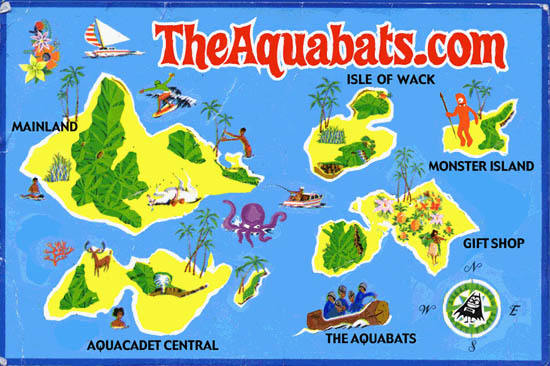 In the news, The Aquabats have officially added a new date to their schedule. Honolulu Hawaii, May 10th. In the past, The Aquabats have never been able to get to the islands, although there have been several close calls. "I really think this could be the one where we actually get on a plane and go to Hawaii "The MC Bat Commander says, "I just hope Hawaii's there when we land." It seems there's been a curse on any attempts for our heroes to play in Hawaii, but this just may be the one time we get lucky. The Aquabats have made big plans for their island takeover, such as surfing, outrigger canoeing, coconut dancing, mountain climbing, cane husking, snowboarding, and playing a show.

Also, coming sooner than you think, The Aquabats will be revealing some new items of merchandise including hats, new T-shirts, and masks. There has been a high demand for rashguards, helmets, and other cadet gear. However we currently have none in stock. Catboy says this, "The more merchandise the kids buy now, the more expensive items we'll be able to produce in the future. It's like the law of the universe." So kids, remember to buy now and pay later. That's the law of America.

Speaking of America, we're dangerously close to World War III, kids. But of course, it'll never happen. Those Palestinians and Israelites have been fighting for centuries. Why should we get involved? We have Jerry Springer on every night and a 7-11 on ever corner. America is so awesome. Speaking of Jerry Springer, maybe he should go over there and just like give videotapes of his show to like all the terrorists and stuff, Maybe they'll like think it's so cool, they'll want to move here and get a job at Weinerschnitzel. He could bring a copy of "Cinderella 2: Dreams Come True" for the kids. It's real inspiring. 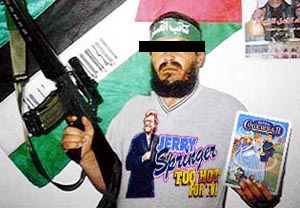 Speaking of inspiring, when we added the last news bit the other day, something froze up or something and it caused some previous posts to be lost forever. So here's a paraphrase of what we had: 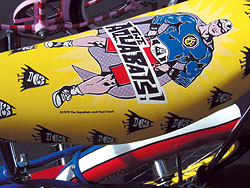 From February to March, there was a Paul Frank art show in LA that featured some cool artwork by Paul Frank. In case you don't know who Paul Frank is, check out his site . He makes all those monkey wallets, you know? Well anyway, it seems he's a closet fan of The Aquabats and he publicly came out with some cool items on display like an Aquabats doll and an Aquabats bicycle pictured here.

Also, in March, Cartoon Network aired the pilot episode for Evan Dorkin's "Welcome to Eltingville" It's about four geeks trying to out-collect each other in the world of collectibles. Evan, who you may know as the creator of comics like Dork!. Hectic Planet, and Milk & Cheese, (not to mention a writer for Space Ghost: Coast to Coast) asked us to write and record the opening and closing theme songs to the show. Of course, we couldn't really relate to a show about comic book collecting, science fiction watching, role playing gaming, and japanese toy hunting nerds. But we gave it a go anyway, and we think it turned out pretty good. We had a lot of fun working on it with Evan and Cartoon Network, and we hope to work with them again. Keep your eyes open for future airings of the show, and if you like it, let them know, so they'll order more episodes! If you want to download the songs, here they are:

Retrieved from "https://theaquabats.fandom.com/wiki/2002/03/05?oldid=11492"
Community content is available under CC-BY-SA unless otherwise noted.