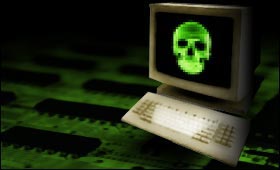 "I've noticed that there hasn't been any recent updates to The Aquabats site in months," said Cadet, Rodolphobat of Charlotte, North Carolina "I was really beginning to wonder if The Aquabats had gotten hurt or something."

These and other rumblings have been rippling throughout cyberspace for weeks. The reason? Fear, homeboy.

Just after the last update in January, The Aquabats were sent a suspiciously ominous E-mail entitled "Anna Kournikova's diet tips!" The E-mail was left unopened for days. Days turned into weeks. Weeks turned into months. Months turned into years. Years to decades, and so on.

Back to our story, rumors had it that this E-mail was a booby trap containing the deadly worm virus, "HAPPYJOYFANTASYFUN2001". Basically, operations were shut down until further analysis could be taken.

"It really messed things up for us here" Says webstylist, The Pigbat, "Everytime we would turn the computer on, we would know that that e-mail was just waiting to be opened. We couldn't stand it, so we decided to stop operations entirely.

"We took a lot of 2-hour lunches, did a lot of backpacking in the High Sierras. I also took some time to get to know my dad a little bit better. It was pretty cool"

Although, this time away turned out to be "pretty cool" for our webteam, it was the cadets who were suffering.

Aquacadet, SeventeenMagazineBat of Minnesota was quoted as saying "What about us? Aren't the cadets important?!?" Reportedly so frustrated by the lack of updates, she has started smoking to try and fit in with the "pretty cool" kids at school.

We had to take action fast. We had to open that E-mail. Th MC Bat Commander was the only one who was actually brave enough to open the E-mail. And when he did, there were actually some "not-so cool" diet tips from Anna Kournikova. Apparently, we had been had!!

Someone had played a joke on us, that had us laughing for hours. A bit of online detectivework traced the E-mail back to "Skippy the cyberclown." That rascal! Skippy and his wacky computer hi-jinks had us in stiches!

Unfortunatley though, due to this virtual prankster, the crack team of web experts speculate that the launch date for the new site will have to be pushed back to April 20th. The Aquabats and the entire Horchata Production New Media department apologize for the incoviniences. Hang in there kids. It's going to be worth the wait in gold.

Retrieved from "https://theaquabats.fandom.com/wiki/2001/01/01?oldid=11487"
Community content is available under CC-BY-SA unless otherwise noted.